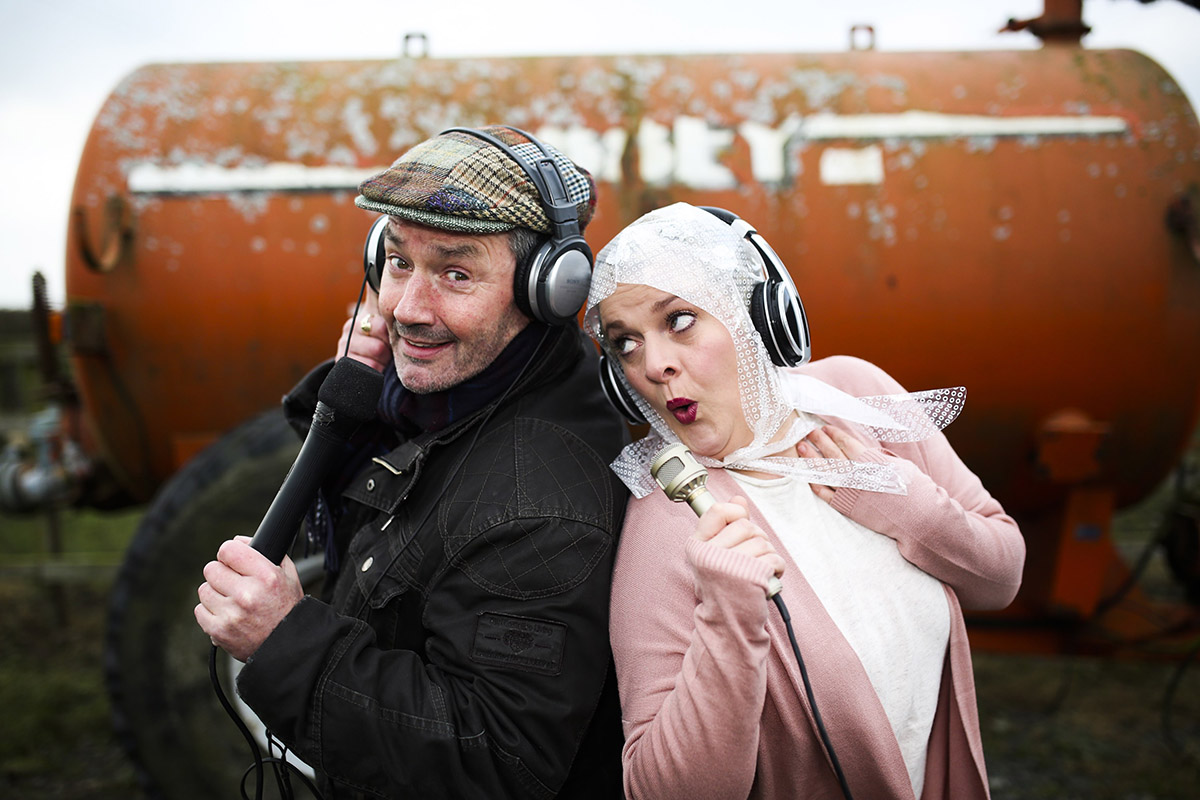 Love is in the Air with c21 Theatre Company Hilarious rural rom-com ‘Ardnaglass on the Air’ takes to the Stage ONE of Northern Ireland’s best-loved plays by local County Antrim playwright,

Love is in the Air with c21 Theatre Company

ONE of Northern Ireland’s best-loved plays by local County Antrim playwright, Jimmy Kerr, ‘Ardnaglass on the Air’ will be performed at the Sean Hollywood Arts Centre Newry on Tuesday 28th February at 8.00 p.m.

This 2017 production has been reworked and is a slapstick comedy focusing on rural community radio broadcasts set in the fictional Ardnaglass, Northern Ireland and includes the themes of love, loneliness and the peculiarities of rural country life along with the slight smell of manure.

So what can the audience expect? Well life on the air can be tough and things aren’t always what they seem.  But are things about to change for presenters Hugh Francis O’Connell and Margaret Mary Rose as a high powered BBC executive is due to visit so could this be their chance to be discovered?  It’s the big day for the ‘Ardnaglass on the Air’ radio show, what could possibly go wrong?

Given that it is Valentine’s Day why not join the rural community radio presenter Hugh Francis O’Connell (played by actor Marty Maguire) as he copes with the unrequited love of his co-presenter Margaret Mary Rose (fellow actor Jo Donnelly).

Stephen commented; “I am delighted to be showcasing ‘Ardnaglass on the Air’ at The Sean Hollywood Arts Centre, Newry. The dialogue between Hugh Francis and Margaret Mary Rose is witty and quick as they hold the fort at the community radio station and muse on the goings on of the village. The play will resonate with the audience in that most of us will know a similar character to Hugh and Margaret or at least one or two of their characteristics. It promises to be a cheerful, surprising and touching show.

“It is a great privilege and honour to work with Tom, Marty, Jo and playwright Jimmy Kerr. After the Lyric Theatre we are excited to be taking this on tour around the province so keep an eye out at your local theatre – it will be well worth a great night out!”

Award winning playwright Jimmy Kerr who presented ‘Ardnaglass on the Air’ in 2010 as part of the annual 1st Irish Festival held in New York, has reworked the play in preparation for this new production.

Jimmy said; “I have had great fun reworking my original play ahead of c21 Theatre Company’s production and revisiting the characters of Hugh Francis O’Connell and Margaret Mary Rose.   The original play came about when I was asked to write a radio-play for Hamm and Clov Stage Company. I didn’t know what a radio play was since I’d never heard one, so I wrote a play about a radio show.

“Luckily it was well received and we have gone on to perform it in various theatres and countries over the past ten years. It’s as much fun for the cast as it is for the audience and we love doing the play so I’m looking forward to our time in the Lyric Theatre and then giving more people the opportunity to see it as we tour around all of Northern Ireland.

Upskill in areas ...
Dear Members, The Open University, in ...
Autism Awareness ...
Newry BID has teamed up with Jack Murphy ...
Free Online ...
Visa and Google UK, have joined forces with a ...